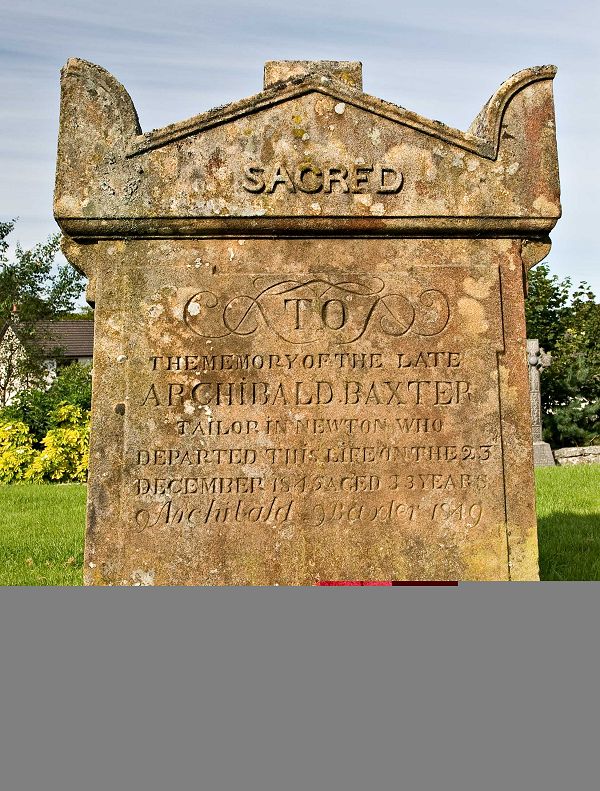 This stone standing in isolation in the northwest section of the graveyard is dedicated to an incomer to the parish.

Archibald Baxter was an Argyllshire man, born in Glenmichael, Kilfinanan on 12th January, 1812. His parents were Archibald Baxter and Helen Lamont. He took up the trade of tailoring, and would have learned his craft skills at the feet of his father or been apprenticed to another tailor in the district. The craft of tailoring varied depending on the customer base served in the territory in which the tailor worked. It is most probable that Archibald’s clientele was made up of farmers, crofters and other country folk. Stout, hard-wearing garments with little thought for fashion and design would be his stock in trade.

Why and when he arrived in the Mearns is unknown but may have been part of the general movement of population from the Highlands and Islands during the early and mid 19th century owing to poor harvests and landlord evictions. The lure of the cities and their potential for a better lifestyle added to this movement.

Working in the village of Newton, Archibald would find a familiar customer base, given the strongly rural make-up of the population. All garments were hand made and usually of woollen cloth constructed in the tailor’s home, where a room might be set aside as a workshop. Some tailors made garments which they sold by travelling out to isolated farmsteads with their goods. It appears that this man at the tender age of sixteen years entered into matrimony with a girl named Janet McLachlan from his home village of Glenmichael. Whether any offspring came of this union is not known.

This rather well made monument made of local stone and handsomely carved, commemorates Archibald Baxter alone, and has an additional inscription indicating another Archibald Baxter dated 1849 as being responsible for its erection. Taking into account the age of the deceased it is most probable that this person is the father of the deceased marking the last resting place of his son.

The cause of death for this young man is also not available. Whether he succumbed to the many diseases which did their rounds periodically in the Mearns or suffered from a condition brought on by his work is anyone’s guess.