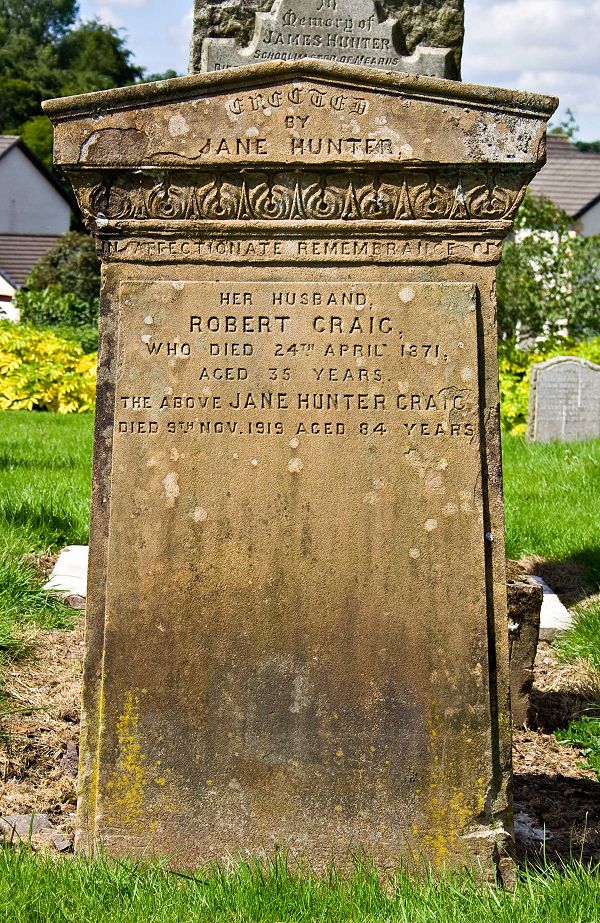 IN AFFECTIONATE REMEMBRANCE OF

Robert Craig was the son of the local shoemaker Robert Craig and his wife, Agnes Blue. He married Jane Hunter, the daughter of the local schoolmaster, James Hunter, and his wife Margaret McLetchie, on 9th June 1859 in the Schoolhouse at Mearns Kirk. Robert was one of a large family, several of whom were employed in the local bleachfield. Robert himself was to follow employment related to the textile industry all of his working life.

At the time of his marriage Robert had already left Mearns and was living in Glasgow where he had found employment as a mercantile clerk. Following their marriage the couple first settled in the Tradeston district of Glasgow where Robert worked as a commercial agent for calico printing interests.

In time Robert and his wife Jane moved to the south of Glasgow where a son James Hunter Craig was born in January 1869 at 4 Albert Drive, Crosshill, then in the parish of Cathcart. At this time Robert’s occupation was that of a warehouseman.

Sadly, two years later, Robert died at the age of thirty-five at 15 Birnam Terrace, Crosshill. At the time of his death from peritonitis, his occupation was that of sewed muslin manufacturer. His death was reported by his brother-in-law, James Hunter of Athole Terrace, Govan. His widow, Jane Hunter, was to survive her husband for another forty-eight years.

Jane Hunter Craig’s parents and four of her sisters are commemorated on the adjacent monument, U09. Her sister Helen Hunter, the wife of Robert Osborne, is commemorated on monument R02.