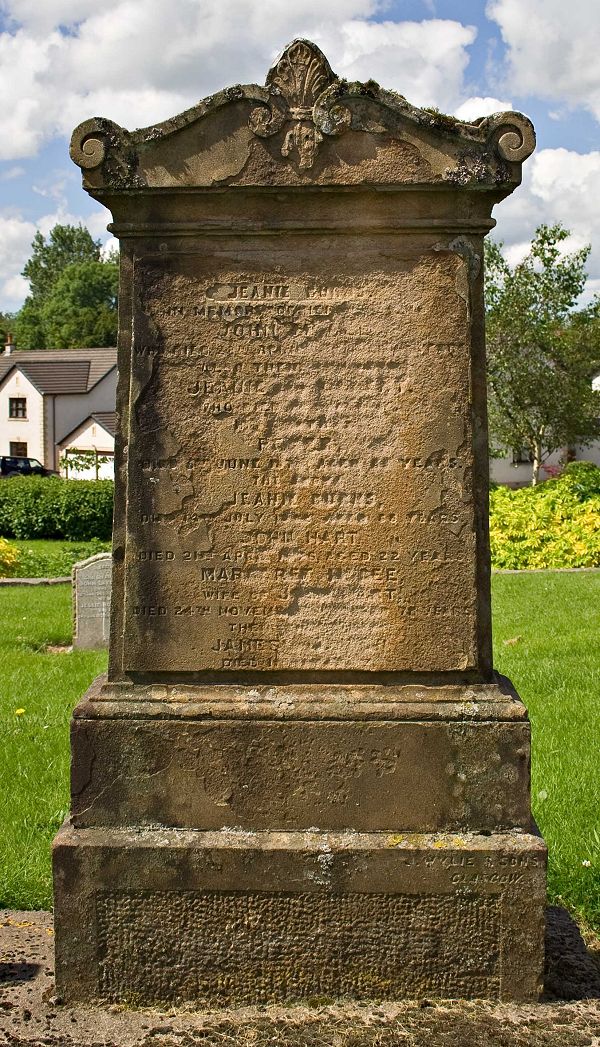 This monument indicates the adverse effect that the ravages of weather and age can have on sandstone, as it has lost most of its inscription through the scouring of those elements. Despite this drawback sufficient information was retrieved to enable a sketch history of the interred to be prepared.

Jane Lawther Burns erected this memorial initially to commemorate the death of her husband, John McGee. Jane appears to have used the name Jeanie which was also used on the inscription. Jeanie Burns and John McGee were married in the Mearns on 16th August 1847, and John worked as a baker to trade.

Amongst several children attributable to this couple, was a daughter Margaret. Margaret who worked as a farm servant, when aged twenty years was to take in marriage a young joiner called John McCorquodale Hart. The marriage took place on 26th June, 1874 in the hamlet of Gateside and was conducted by the Rev. Mungo Reid, minister of Mearns Parish Church. The couple settled in Gateside and before long produced a son whom they called James after his paternal grandfather.

The newly wedded bliss this young couple may have experienced, particularly with the birth of their first child, was not to last. Tragically John on 26th April, 1876, a mere two years after his marriage, was to die by gunshot wound. He was, it was reported at 2.30pm on the aforesaid date, in a field belonging to Shaw Farm when his gun in his own hand, went off accidentally, thereby inflicting instantaneous death.

John McCorquodale Hart had been the son born to James Hart and his wife Catherine McCorquodale. James Hart was listed as being an engineer/mechanic from Busby and had met and married his wife in the adjoining parish of Eastwood. Considering the time period in which this person worked he was obviously in the forefront of the industrial expansion then taking place, and would most likely have been involved in the maintenance of machinery connected with the many mills in the area.

The remainder of the persons appearing on this monument relate to three McGee siblings Jeanie, Peter and Margaret as well as James Hart, father of the gunshot victim.