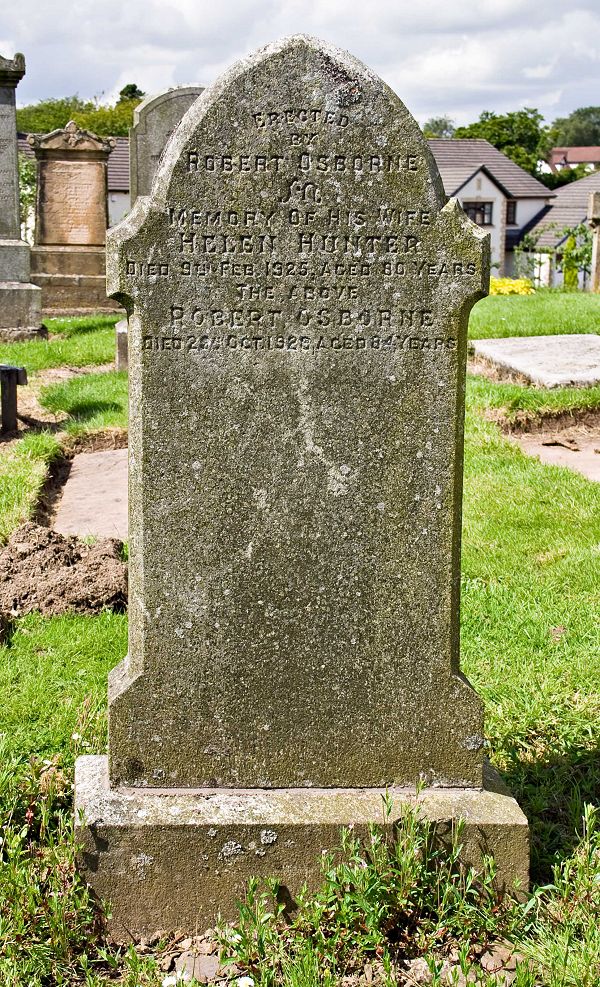 Faulds Farm lying to the south-west of the village of Newton, bordering on the beginning of open moorland, was the birthplace of the subject of this memorial Robert Osborne. Born in 1844 to farmer James Osborne and his wife Christina Cochrane, Robert was the eldest in a family of seven sons and three daughters. The farm although some three hundred and sixty acres in extent was not particularly good land with only one hundred and fifty acres classed as arable, the remainder being open hilly moorland and bog.

Amongst the sons of the family, most chose not to follow their father into farming, following such varied careers as bank teller, warehouseman, mechanic, contractor and, in Robert’s case grain and provision merchant. The three daughters set up a small private school alongside the parochial school at Mearnskirk and there taught the children of some of the wealthier members of the community.

On 26th September, 1876 the parochial schoolhouse at Mearns would have been empty of pupils as the school master James Hunter and his wife Margaret McLetchie presented their daughter Helen as the bride to be of Robert Osborne. The ceremony was carried out by the Rev Mungo Reid of Mearns Kirk and witnessed by James Hunter and John Osborne, brothers of the bride and groom. Perhaps the wedding party took advantage of the near vicinity of the Red Lion Inn at the beginning of the hamlet of Gateside, to celebrate this happy occasion. There would certainly have been no shortage of victuals as the groom was the proprietor of a provision merchant’s shop in Main St, Newton.

The couple remained in the village for many years engaged in the running of their grain and provision merchant’s business. The business obviously prospered as eventually Robert and his wife were able to have a substantial house, which they named “Broomlea”, built on Kilmarnock Road

Both enjoyed a lengthy life being laid to rest in Mearns Kirkyard in the 1920’s in their eighties.