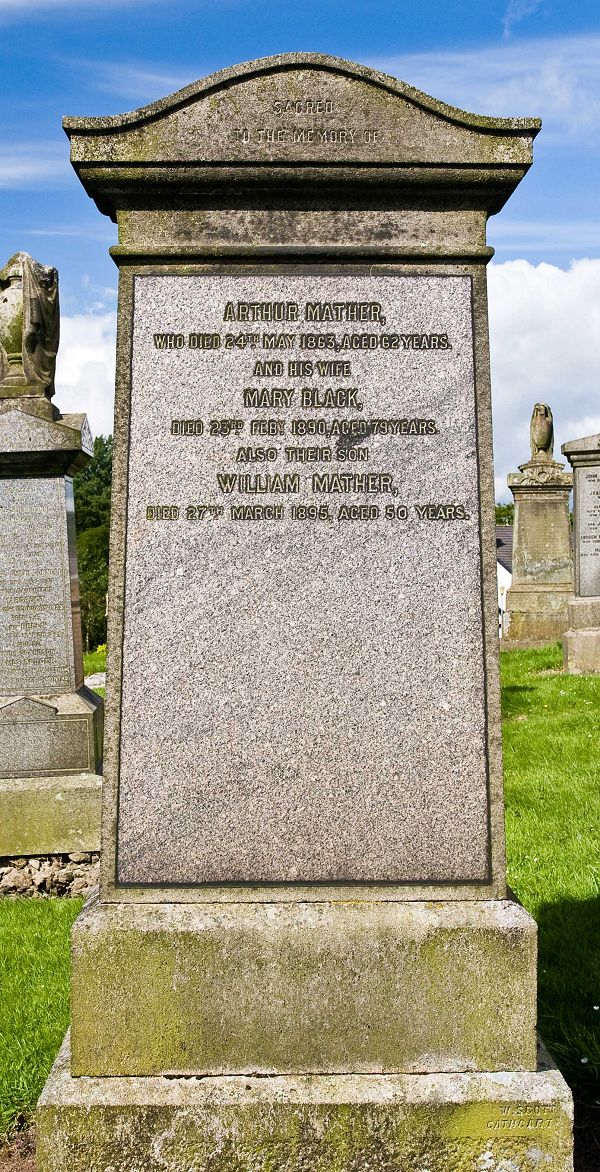 SACRED
TO THE MEMORY OF

Netherplace Farm, the home and business relating to the family enumerated on this monument was to found situated between Malletsheugh and Caldcoats farms to the west of the village of Newton. The farmland associated with this steading was extensive and over the years varied from one-hundred and sixty acres to three-hundred and five acres with land being bought and sold on a regular basis.

Arthur Mather first listed on this stone was born to a Mearns farmer William Mather and his wife Jane Gilmour in 1802. By 1841 Arthur was occupying Netherplace alone, a daunting task considering the size of the holding.

On 7th March, 1842 Arthur travelled into the city of Glasgow where he took in marriage a girl named Mary Black. Mary was from the Isle of Lismore in Argyle and may have come to Glasgow to find work. Eleven years separated this couple in age but it was not long before Mary was starting to produce the family that would fill the farmstead with childish delight for the erstwhile bachelor. Five children made up the family Ann (b.1843), Agnes (b.1844), William (b.1846), Alexander (b.1848) and Arthur (b.1850).

The farm by this time was thriving and required the services of eight agricultural workers to help cope with the work involved.

Arthur unfortunately contracted cancer from which he suffered for two years before succumbing to the disease in 1863 aged sixty-one years. His wife Mary, obviously a capable woman, kept the farm in operation for a number of years until her son William was able to take over in 1881. William didn’t marry and his mother remained on the farm until her death in 1890. William continued to farm at Netherplace with a much reduced workforce and the assistance of his unmarried sister Mary and an eight year old niece called Minnie.

William did not survive past fifty years when, suffering from a brain and spinal tumour, he died at the farm on the 27th March 1896.