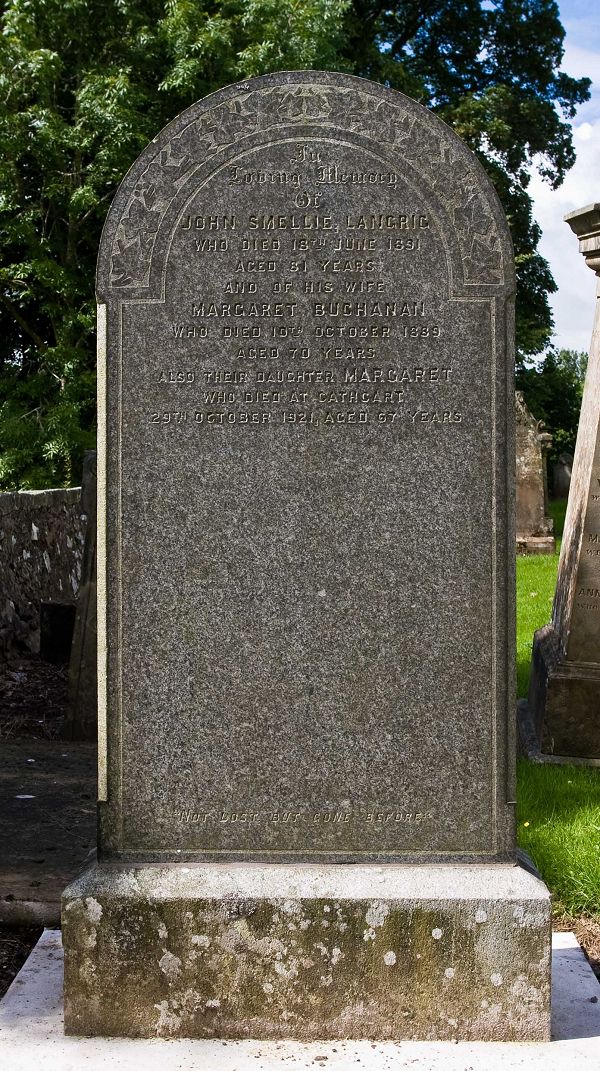 In
Loving Memory
of

John Smellie and family were not natives of the Parish of Mearns, having originally come from Cambuslang in Lanarkshire. It is not until 1862 that we find them living at the farm of Lanrig. In earlier times the farm had been known as Langrigg which name originated from the medieval system of land allocation known as riggs. The use of the prefix ‘lang’ would denote that this land unit had been narrow but lengthy in its layout.

The farm, situated as it was to the south of Mearns village, and bordering on moorland, was described as being of seventy-four acres in extent, only sixty-five of which were arable. Sheep and black cattle were the most likely source of income on this type of farm.

John Smellie had married his spouse Margaret Buchanan at Cambuslang in 1842. Margaret, originally from East Kilbride, produced seven children for her husband, four sons and three daughters. One of the sons John became a draper to trade, whilst son William took to the profession of school teaching. Several of the children did not marry and when John Smellie was eighty-one years of age he continued to farm at Lanrig, with the assistance of two farm servants and three of his children still residing with him. Daughters Margaret and Christina, remained unmarried within the family home, as did son William the schoolteacher.