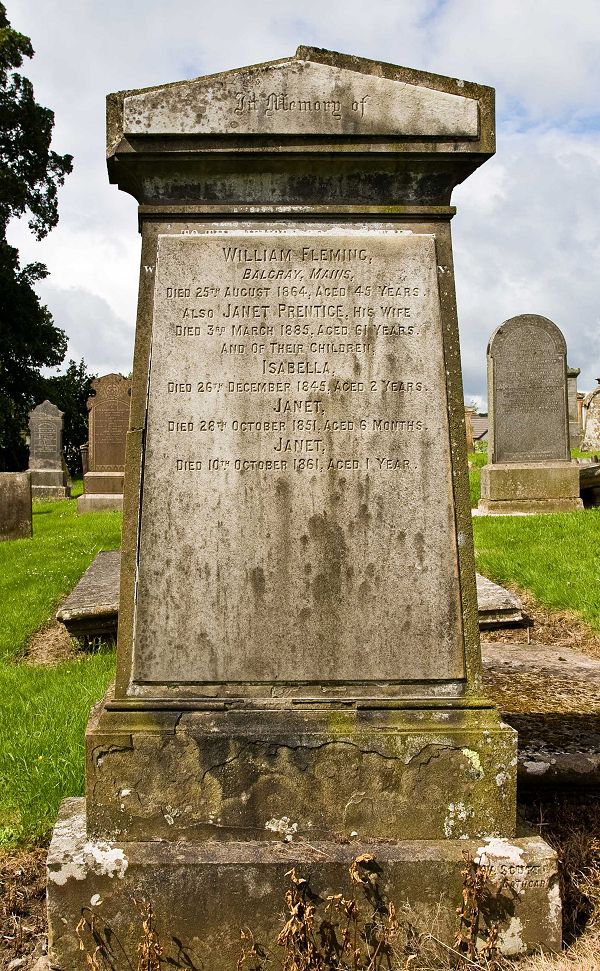 William Fleming, commemorated on this stone, was the illegitimate son of a farmer’s daughter called Margaret Fleming. Born on 1st May, 1821 in Carmunnock he was to follow his grandfather into farming.

He married Janet Prentice, from Eaglesham, when he was twenty-two years of age, his wife was five years his senior. He and his wife had settled in the farm of Balgray Mains, Mearns, by 1850. The farm was some eighty-seven acres of reasonable arable land and would have suited his needs which were primarily involved in horse dealing.

The couple were to raise a family of five children to maturity, but not without the loss of three others as babies. Their firstborn daughter named Isabella died aged only two years in 1845. Another daughter born in 1851 and named after her mother was to survive for only six months before departing this life.
As was not uncommon in those times the next female child born was given the name of the previously departed daughter. This occurred when another child was born in 1861 and named Janet, and like her earlier two sisters was only to survive a short period before joining them under the soil. Despite these traumatic and tragic losses, the couple in due course of time produced another daughter to whom they also gave the name Janet. Despite their previous experiences they were to see this child survive until adulthood.

Death was no stranger to this family as father William was found dead, without warning or apparent cause, in his bed on the farm on 25th August, 1864, aged only forty-five years. This sudden death may have come about as a result of heart failure due to over exertion at haymaking at this time of year.

Janet Fleming, nee Prentice, continued working the farm for another twenty years until the reins passed to her youngest son Thomas on her death in 1885.