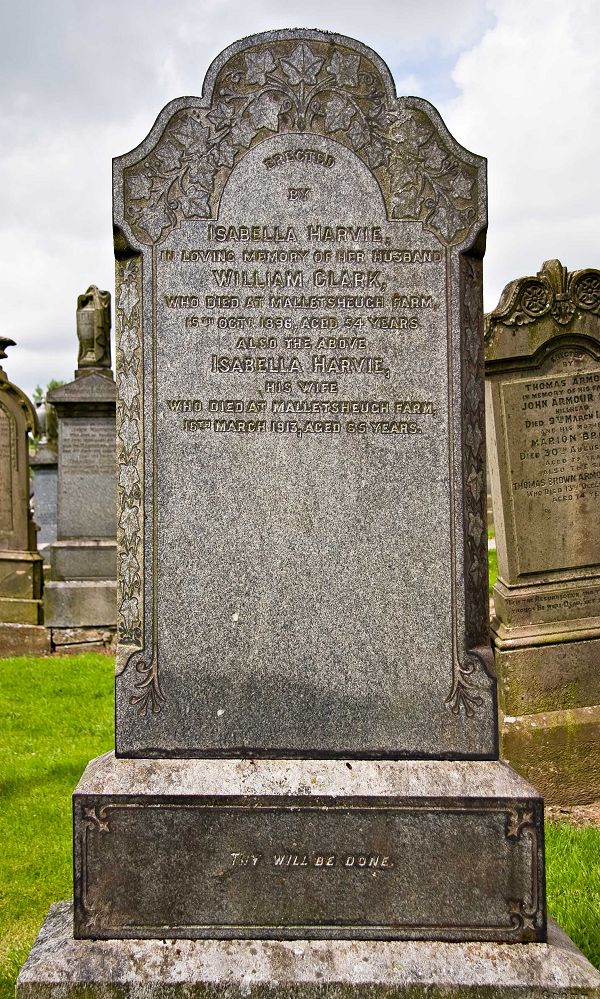 
THY WILL BE DONE

William Clark commemorated on this stone was born to William Clark and Agnes Pollock on 8th December, 1842. The family at that time resided at Millerston Cottage, Waterfoot, where William Clark Sen. carried out his business of horse dealer. He was to move eventually to Nether or Lower Malletsheugh Farm near to the village of Newton Mearns. His son William succeeded his father in taking over the farm at Malletsheugh as his father became aged.

William was to marry a girl from Arden Farm by the name of Isabella Harvie and together they raised a family of six children, four daughters and two sons.

William was described by a contemporary as being a large, light hearted man always good for a bit of fun. It is recounted that during the haymaking on one occasion, William was found to be organising wrestling matches amongst local village boys instead of attending to his work, much to the annoyance of his fellow workers.

His wife also seemed to be a woman of some character. The story goes that, the farm being near to the village of Newton Mearns and on the route of children from outlying farms making their way to the local school, she kept a pen and ink bottle in a hole in the wall of the farm so as the pupils could if they wished compare their homework and make any necessary adjustments before they reached school.

The farm at Nether Malletsheugh being very near to the village of Newton Mearns on the road to Barrhead consisted of some one hundred acres of good arable land. Apart from the usual dairying common to the district, William continued in the family tradition of horse and cattle dealing. After his father died his mother and brother Hugh took up residence in Prospect House in the village. This house belonged to the Russell family into which one of William’s daughters had married.