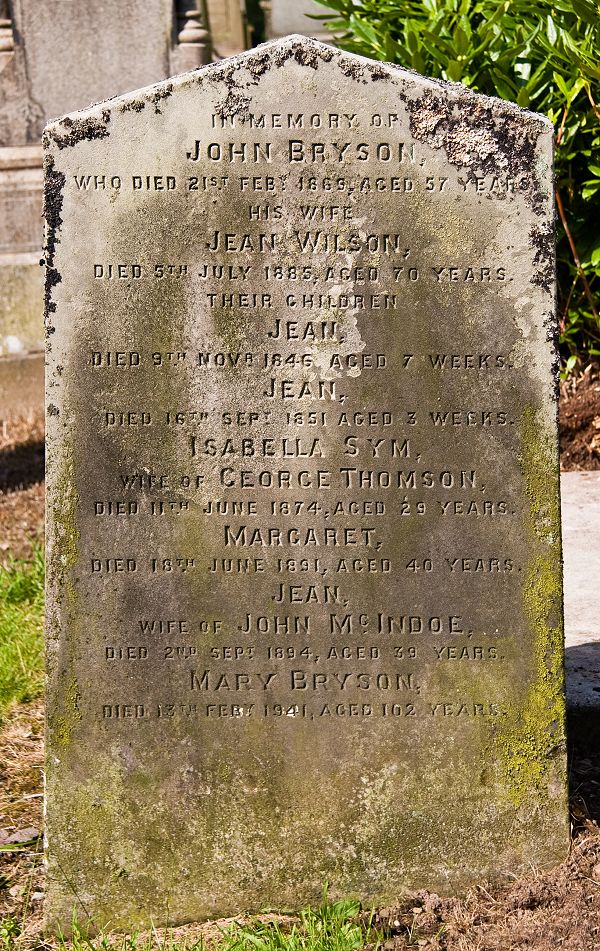 This rather plain monument relating to the Bryson Family is testament to the perils in the way of achieving advanced years during the 19th and early 20th Centuries.

John Bryson, father of this family, was born in Riccarton near Kilmarnock in North Ayrshire in 1812. His father Alexander was an inn-keeper in that village, a job he shared with his wife Isabella Syme or Sim.
John did not follow his father into the licensed trade but chose to work in the ever burgeoning industry of textiles. He became a bleachfield worker and was such when he married his spouse Jean Wilson in Riccarton on 5th October, 1838.

Their first child, a daughter Mary Blane Bryson, was born in Riccarton on 23rd January, 1839. Whether it was the early arrival of this child so shortly after their marriage that drove them to leave Riccarton, by the following year they were to be found residing in Dalserf in Lanarkshire. It was in this village that their second child, a son named Alexander, was born on 5th of April of that year.
Within a year of this event Jean Bryson was producing yet another child, this time in their final settling place of the village of Newton in the Parish of Mearns.

In total this couple were to produce eleven children, two of whom did not survive babyhood. The survivors in addition to the two already noted, were William (b.1841), Robert (b.1843), Isabella Sim (b.1844), Andrew (b.1848) and Allison (b.1854). Two children who failed to survive to adulthood are shown on the memorial as both being called Jean. It was a common practice in these times,to replace a deceased child by giving the same name to a later birth.

John Bryson was to expire as a result of having suffered from a stomach ulcer for six months prior to his death in February, 1869. His wife, despite or perhaps because of her busy and hard life raising nine children on a bleachfield workers wage, was to live as a widow for another sixteen years before being placed alongside her husband beneath this monument.

As will be observed on the monument, several of the children of this couple, in all cases daughters are commemorated on this stone. One such, the firstborn daughter Mary, was to reach the very advanced age of one hundred and two years before passing away in 1941.Having lived through so many world changing events during her life time including the Industrial Revolution, world recessions and several major wars, including the Crimean, Boer and First World Wars, must have made this lady’s life very interesting.