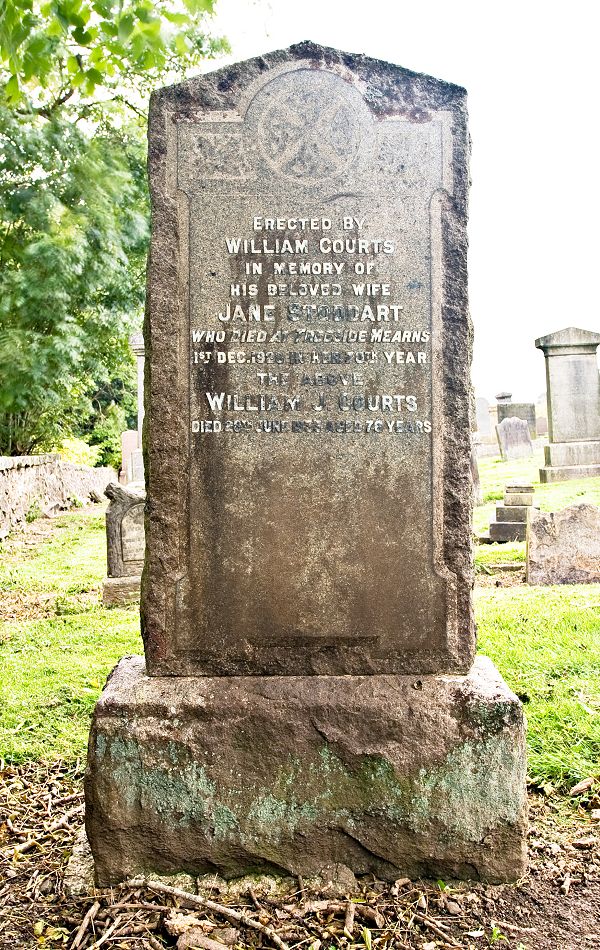 ERECTED BY
WILLIAM COURTS
IN MEMORY OF
HIS BELOVED WIFE
JANE STODDART
WHO DIED AT TREESIDE MEARNS
1ST DEC. 1928 IN HER 70TH YEAR

William Courts was born in Cornwall in 1857 where he lived out his childhood and school years. He then entered service to train as a footman and then as a butler. It was while serving as a footman in London that he met his future wife, Jane Stoddart, a sheep farmer’s daughter from Peebles who was a parlour maid in a household just around the corner. The couple were married in 1885, and in 1894 had a son, Frederick James, who was born in a small village outside Dunbar called Spott.

Sometime later they moved to Stewarton to farm the land at a small farm called Bloomrig. Eventually they moved again, this time to Newton Mearns and Maidenhill Farm, where on leaving school Fred joined his father in the running of the farm. Early in 1925 Fred married Margaret McIntyre from Corselet Farm, and William and Jane were able to retire to Treeside Cottage, opposite the Malletsheugh Inn. Sadly Jane died nearly four years later and in 1931, while on holiday in Cornwall, William suffered a stroke. After some time in hospital he was brought back by train ambulance to be nursed by his daughter-in-law. He died in 1933.

At some time, possibly the period before Fred was born, it is reported that William as butler and Jane as lady’s maid served at Southfield House, which was sold in 1913 to the Corporation of Glasgow in order to build a hospital for children suffering from tuberculosis. This hospital which opened in 1930 was originally named Mearnskirk Hospital for Children, but later when adult patients were admitted it was simply known as Mearnskirk Hospital.

The prestigious modern housing development at Mearnskirk was built in the grounds of the hospital following its closure in the 1990s.