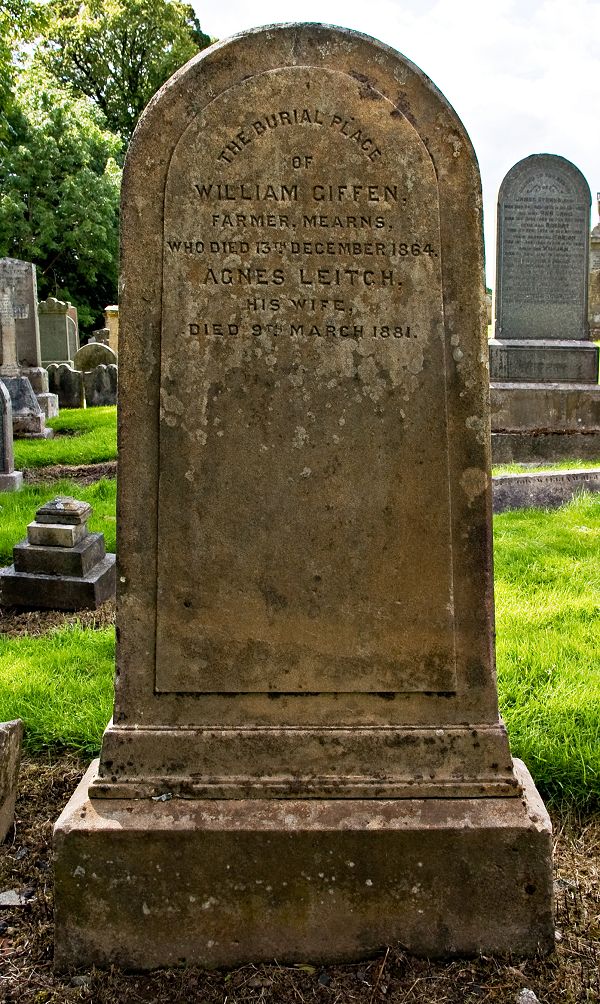 Castle Farm situated to the north-east of Mearns Castle in what is now Broom Road was a substantial holding of one hundred and twenty acres of arable land. The occupant of the farm for four decades was a member of a well-known Mearns family by the name of Giffen.

William Giffen, born at King Henry’s Knowe, a small holding within sight of Castle Farm, was to involve himself in the business of horse dealing as well as general farming. Born to Cornelius Giffen and Agnes Russell in January 1799, he married Agnes Leitch from Crofthead, Mearns in 1825.

Between the years of 1826 and 1840 this couple were to produce a brood of nine children in total. The farm prospered and William earned a reputation as a respected horse dealer in the area, an animal then of great use and value in the community.

In December, 1864 William suffered a stroke and died aged sixty-three years. His wife was unable to sustain the farm and in due time it transferred to the stewardship of John Reid. Agnes Giffen nee Leitch was to survive for another seventeen years before joining her husband under this headstone in Mearns Kirkyard.

Their eldest son William had earlier worked alongside his grandfather Cornelius at King Henry’s Knowe and remained there with his wife and five children until the 1860’s when he left the farm. The farm at King Henry’s Knowe was never worked again as an independent unit, the land being absorbed into nearby farms and the steading used as accommodation for itinerant agricultural workers.