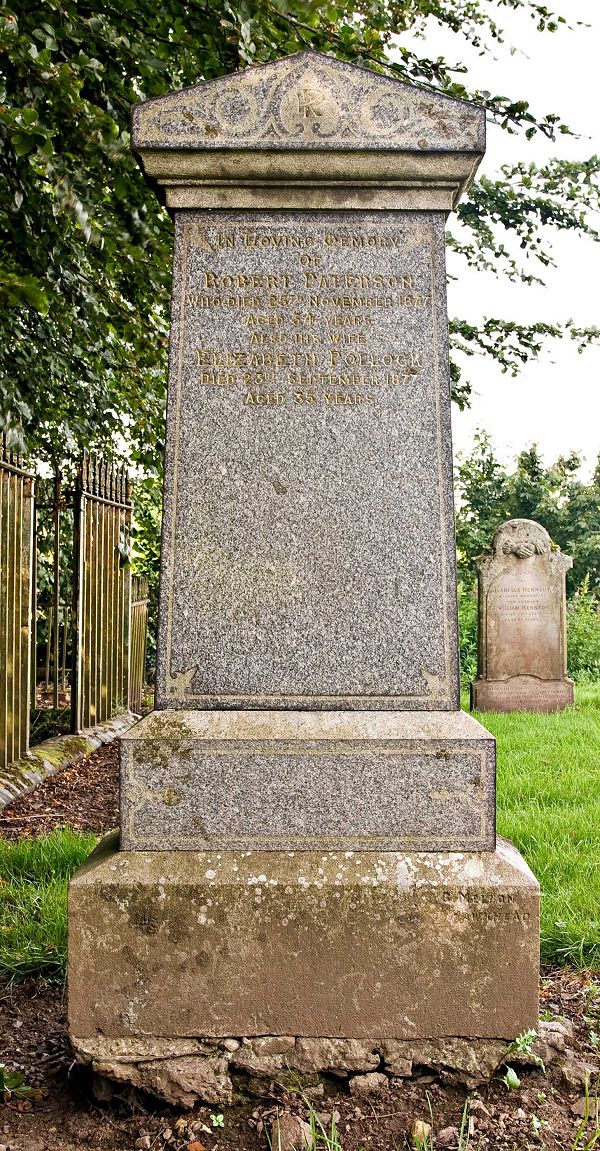 This very handsome granite memorial covers the last resting place of a couple who were denied the privilege of seeing their children reach maturity.

Robert Paterson, the first named, was not a native of the parish but originated from the district of Waterloo in Cambusnethan, Lanarkshire. It was there that he was born on the 10th August, 1843 to a contractor’s carter named James Paterson and his wife Ann Ferguson. Robert did not follow in his father’s footsteps, as he trained to become a baker.

Somehow or other he met up with a local Mearns lass by name of Elizabeth Pollock and they through time entered into marriage at Mearns in 1864. Elizabeth was the daughter of a shoemaker named James Pollock and his wife Mary Hutchison. At the time of their marriage the groom was twenty-one years of age and his bride twenty-two years.

The couple took up residence, not in the Parish of Mearns, but in the Parish of Gorbals then independent from the City of Glasgow. Setting up home at 65 Thistle St in that district would have been a great change for this young bride who had come from the rural pastures of Mearns.

Thistle St, Gorbals ran from Caledonian Road northwards to the banks of the Clyde. A long street, it was broken into two sections, one being given the title Upper Thistle St. The housing in which this couple raised their family would have been tenement properties of four storeys, often with three houses on each landing. Single roomed apartments were most common and to have a room and kitchen was a desired aim for many families. The district was renowned for its great ethnic mix even in those times; having been the recipient of large numbers of Eastern European Jews escaping the pogroms in Russia and associated countries. Huge numbers of Irish and Scots Highlanders also settled in the area as a result of famines and clearances in their homelands. Living conditions to say the least were horrendous with high mortality rates amongst all age groups through disease.

Elizabeth was to enjoy only thirteen years of marriage before succumbing to a heart condition and dropsy at the early age of thirty-five years. This death took place in September 1877 but was followed by that of her husband who died within three months of his wife in November of the same year, having suffered from tuberculosis for a year prior to his demise.