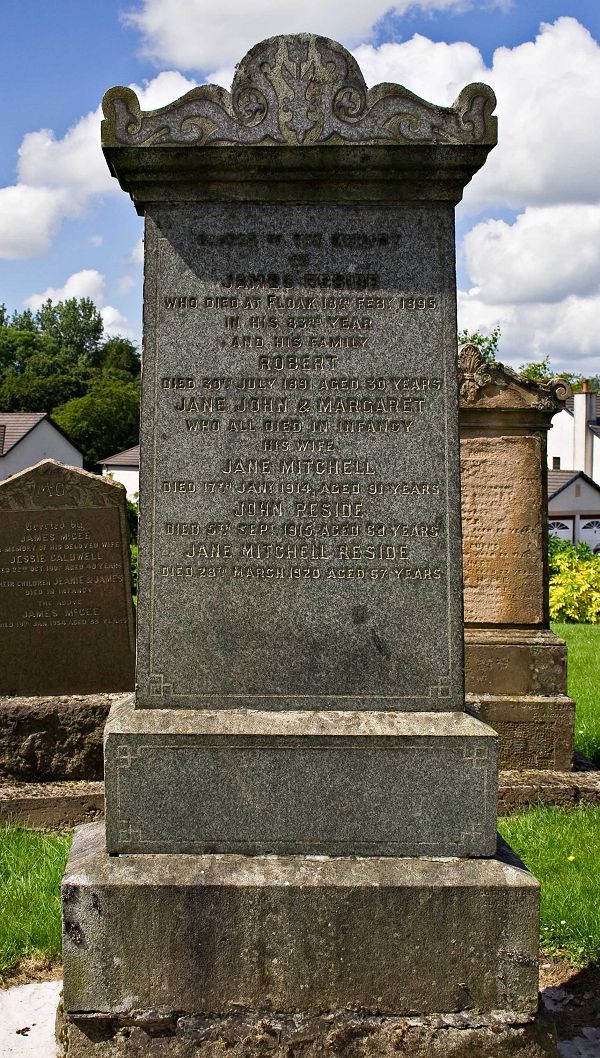 The family remembered on this memorial should not be mistaken for another Mearns family called Raeside. There was no connection between these two distinct groups.

The Resides were a long established farming family within the district, and several members of the clan farmed in various parts of the parish over several generations.

James Reside, the first named on this memorial, was born to James Reside and Agnes Ferguson in the hamlet of Uplawmoor near Neilston on 11th January, 1812. Eventually James Jnr. took himself a wife, a Mearns girl by the name of Jane Mitchell. The marriage took place in the Mearns on 19th June, 1846, the same year that a serious typhus epidemic swept through nearby Glasgow.

By 1881 the family were settled in the farm of South Floak on the south-western boundary of the parish. This farm although some two hundred acres in extent, was not easy land to work as it verged on rough moorland, and required a lot of work to install drainage and remove stone whereby some of the land could produce limited crops such as oats and potatoes. Despite the undoubted hard life the family had to endure, they remained at Floak until well into the 20th Century.

During their residence at South Floak or Floakside as it latterly became known, several of the children of the family died. Mentioned on the monument were Jane, John and Margaret as well as son Robert who succumbed to pleurisy and peritonitis at the age of only thirty years.

On the death of his father, son John took over the running of the farm along with his sister Jane and brother Andrew, none of whom had married. Their aged mother stayed with these remaining children at the farm until her death in 1914.