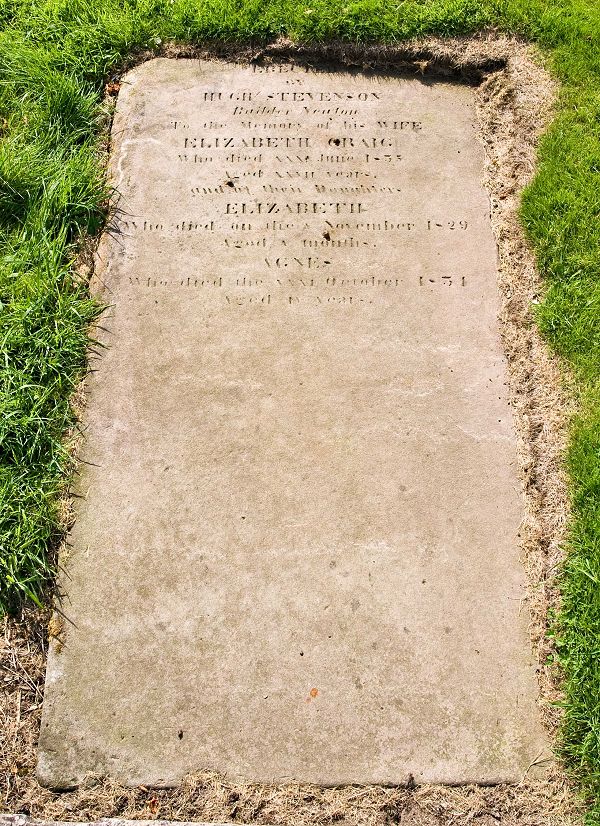 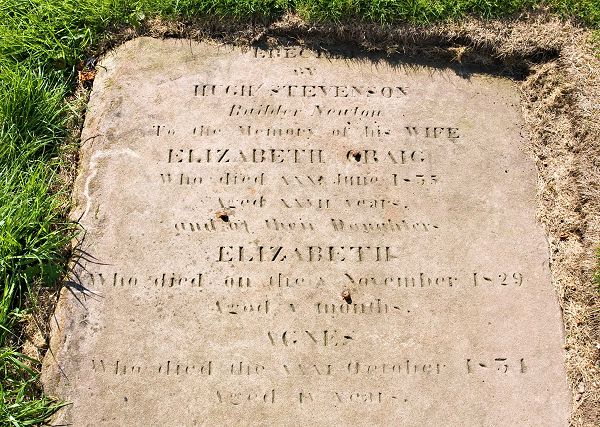 And for their daughter

One of largest table stones to be found within the precincts of Mearns Kirkyard was placed there by a local builder by the name of Hugh Stevenson. Tragically this memorial covers the remains of his wife, two baby daughters and possibly himself.
Hugh was not a local person having been born to his parents, William Stevenson and Agnes Smith, in Stewarton, Ayrshire, on 7th January, 1801. Although Stewarton was in an adjoining county to Renfrewshire it was within walking distance of the parish of Mearns and many contacts were established between the two communities. One such was the meeting of Hugh and his future wife Elizabeth Craig.
Elizabeth, born on 2nd November, 1806 in Mearns, was the child of George Craig and his spouse Mary Andrew. Elizabeth and Hugh were to marry, not as normally expected in the bride’s parish, but in Stewarton, the home of the bridegroom. The marriage took place on 24th December, 1824.
Only two children were born to the couple as far as can be ascertained, daughters given the names Elizabeth and Agnes. Unfortunately, neither child was to survive babyhood. The family by the time of Elizabeth’s birth on 5thAugust, 1829, had taken up residence in the Mearns. Elizabeth may have been an obviously sickly child as it appears she was christened only two days after her birth. She did not survive long after her birth, dying aged three months in November, 1829.
Agnes, the second daughter, was born in the Mearns on 17th May, 1831, no doubt to the great joy of her parents as a replacement for her earlier deceased sister.
Their joy was short lived as Agnes was to die, aged three years, on 31st October, 1834, joining her sibling beneath the turf of the kirkyard at Mearns.
Obviously the death of two children within such a short period of time must have had an adverse effect on the health and wellbeing of the parents and in particular that of the mother. Elizabeth Craig was to die only several months after her youngest daughter on 30th June, 1835.
Nothing is known as to the future life of Hugh Stevenson. Possibly he subsequently joined his family beneath this stone. This may give us an answer to a riddle concerning its appearance.
Embedded in the memorial’s face are three small metal rings, the purpose of which is unclear. They appear to have been placed at random without any thought having been given to their encroachment onto the inscription on the stone. It may be that they were intended to be anchor points for fixing lifting equipment so that Hugh might re-join his family in due passage of time.