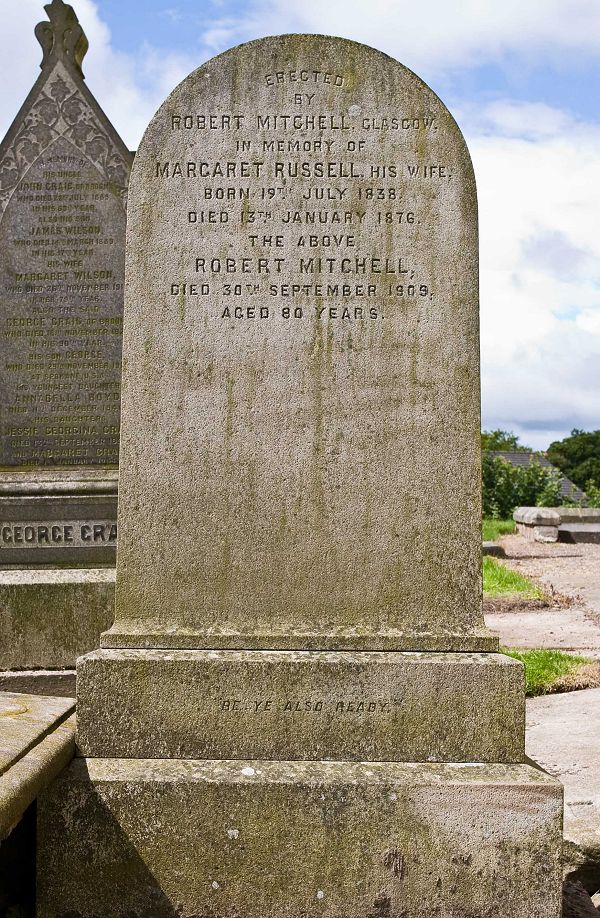 Robert Mitchell, the man responsible for the erection of this monument, was an example of a country lad made good.
Born in 1829 to farming parents and first cousins John and Jean Mitchell in the parish of Mearns, he was taken to the adjoining parish of Eaglesham for his baptism. The family, originally from Sorn in Ayrshire, had for a short time farmed in Eaglesham before moving to Mearns.

Son John, Robert’s elder brother, followed the traditional family route, taking after his father as a farmer. He farmed at High Cairn Farm situated on the western extremity of the parish near to Floak. This farm of some one hundred and ten acres was suitable only for sheep grazing and rough cattle pasturage.

Robert did not take up farming preferring to pursue a career in the grocery trade. In 1863 he married Margaret Russell, the daughter of a local landowner William Russell and his wife Margaret Gilmour. The couple through time were to move to Glasgow where Robert advanced his employment status to that of wholesale grocer. In 1864 their union produced a daughter whom they named Margaret Gilmour Mitchell after her maternal grandmother.

Their life together was to be tragically short with the death of Margaret Russell on 13th January, 1876 at their home at 50 South Apsley Place, in the Laurieston district of Gorbals. The cause of death given was obstruction of the bowels and congestion of the lungs.

Robert continued in his business activities and remained a widower for the remainder of his life. His daughter acted as his housekeeper and remained unmarried. Robert lived for another twenty-three years as a widower before suffering a cerebral haemorrhage at the age of eighty years. He passed away at his then home, 25 Queen Mary Ave, Strathbungo, Glasgow.