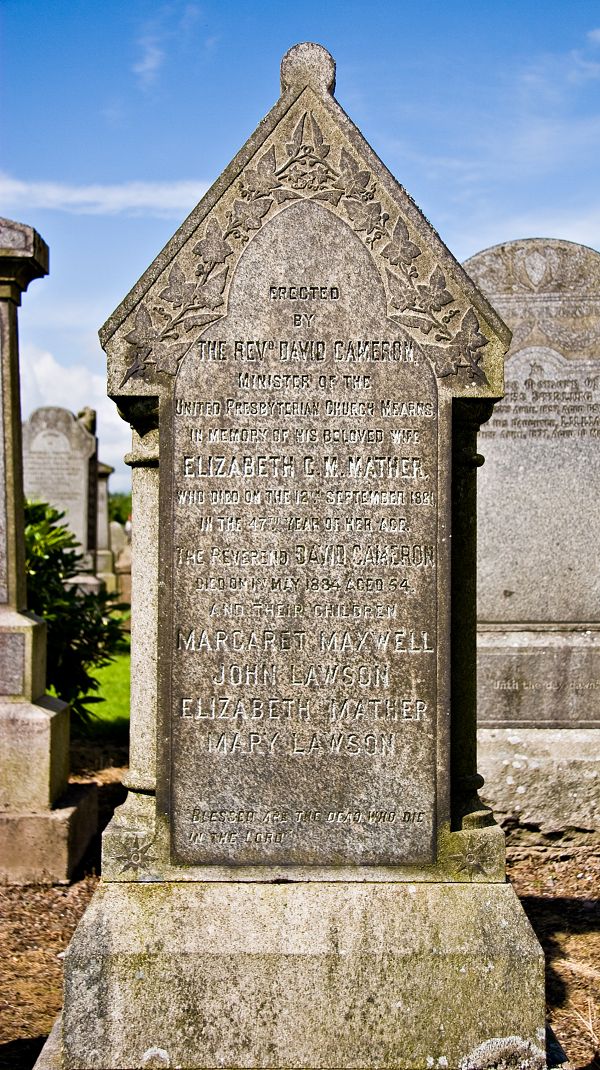 ERECTED
BY
THE REVD DAVID CAMERON
MINISTER OF THE
UNITED PRESBYTERIAN CHURCH MEARNS
IN MEMORY OF HIS BELOVED WIFE
ELIZABETH G.M. MATHER
WHO DIED ON THE 12TH SEPTEMBER 1881
IN THE 47TH YEAR OF HER AGE.
THE REVEREND DAVID CAMERON
DIED ON 1ST MAY 1884 AGED 54
AND THEIR CHILDREN
MARGARET MAXWELL
JOHN LAWSON
ELIZABETH MATHER
MARY LAWSON


“BLESSED ARE THE DEAD WHO DIE
IN THE LORD”

This memorial was erected by the Rev. David Cameron in memory of his wife, Elizabeth Mather, who predeceased her husband by three and a half years.

His name and those of their children were later added to the monument. Mr. Cameron’s name is also inscribed on monument G07 which the United Presbyterian Congregation erected as a memorial both to him and his predecessor, the Rev. Hugh Stirling.

Both the minister and his wife seem to have suffered from indifferent health. It is recorded that about 1870 he spent some time on the Riviera in an attempt to improve his health and it is clear that he demitted office some considerable time previous to his death. It seems significant too that a nurse was included in the manse household in 1881 possibly to care for Mrs. Cameron whose death later that year at the age of forty-six was attributed to enlargement of the heart.

Mr Cameron is said to have been a man of courtesy and charity, and was able to reconcile the various parties in the congregation who had taken nearly three years to agree about their choice of a successor to their previous minister, Mr Stirling.

In 1866 a new manse was built on the Kilmarnock (Ayr) Road, a substantial stone building still standing at 204 Ayr Road.

To this manse at holiday time came a young boy, Mr Cameron’s nephew, who in later life was to gain recognition as an artist. He was Sir D. Y. Cameron R.A., F.S.A. LL.D (1865-1945) who in later years described Mearns as ‘The place I knew so well in early days, when it was ‘far away’, an upland village and parish, a place of dreams’.