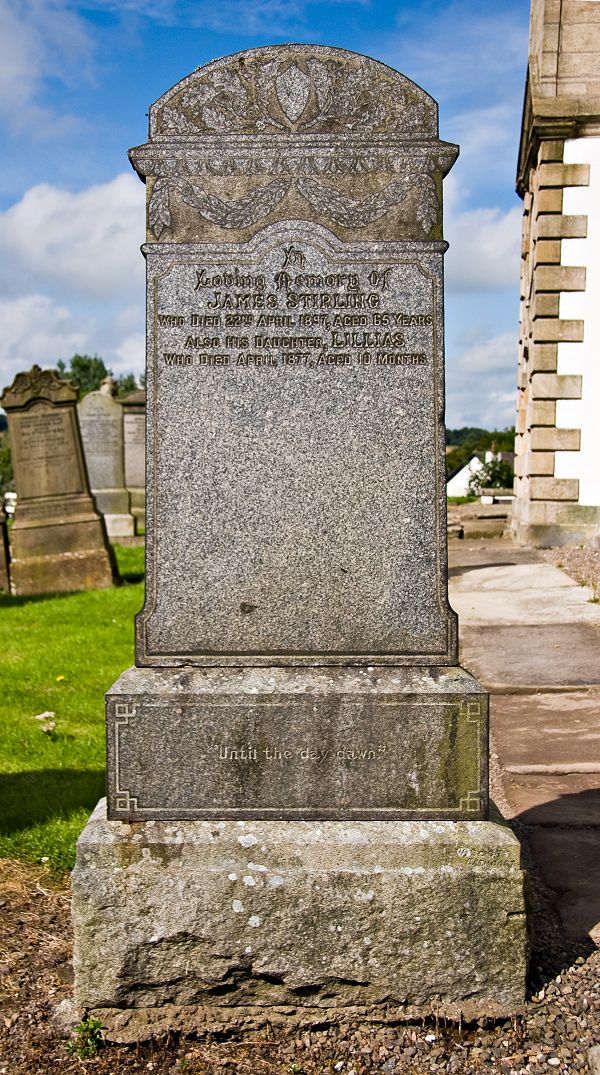 IN
LOVING MEMORY OF


“UNTIL THE DAY DAWN”

The son of John Stirling of Housecraigs farm , James Reid Stirling married Lillias Fleming on 12th December, 1862 at her parent’s home, nearby Newford farm, on the outskirts of Busby. Following their marriage the couple farmed at Gateside which was adjacent to Newford farm.

Their ten month old daughter Lillias died on the 2nd April, 1877. The cause of her death was recorded on the death certificate as ‘laryngitis of six days duration’.

Lillias was the only one of James and Lillias Stirling’s children to have her name inscribed on this headstone. The records suggest however that the couple had another five children, including another daughter named Lillias, who was born in 1878, one year following her sister’s death.

James, her father, suffered a cerebral haemorrhage and died suddenly at Gateside Farm on 22nd April 1897. His widow Lillias outlived her husband by over 30 years. Her death occurred on the 16th February 1928 at Housecraigs at the age of ninety-one years.

Newford and Gateside farms were situated just over one mile south of Clarkston Toll on the site now occupied by Williamwood High School. They appear on John Ainslie’s map of 1796 on the east side of Eaglesham Road.

Housecraigs Farm (Craig House), situated opposite Newford and Gateside farms on the west side of Eaglesham Road, is also shown on this map. In recent years Housecraigs has been converted into a private dwelling. The initials A R and the date 1794 can be seen on the lintel above the front door of the house.