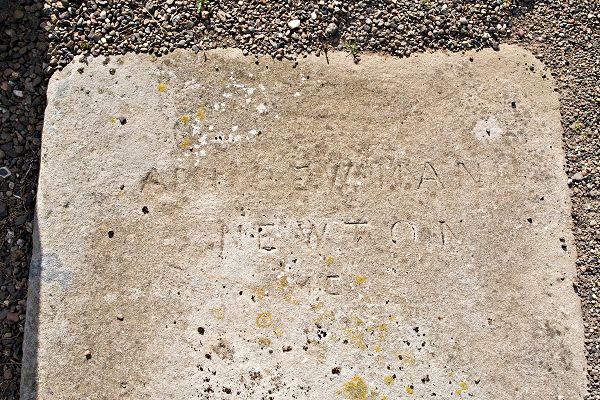 This flat stone was discovered by chance under the gravel path at the southern face of the church building. It appears as if it may have been placed there from elsewhere in the kirkyard as it has been in use as part of the paving in that area.

The stone itself is made of local whinstone and of a very simple design. At the head of the stone the short inscription is incised and at the bottom left corner of the stone appears a square cut out portion about 2 inches in length. This marking would appear to have been created for purposes unrelated to the grave or the stone’s original purpose.

The minimalist inscription relates to a person named Andrew Mann of Newton. No other details’ concerning this person is given including relevant dates.
Investigations have identified that an Andrew Mann married a Margaret Cameron in the Mearns on 15th October, 1825. This date would be consistent with the style and condition of the monument.
Andrew Mann was the son of William Mann, a farmer at Netherhouse Farm. His mother was Margaret Strang, from another well-known family of Mearns farmers. Despite his origins, Andrew did not follow his parents into farming, but sought his fortune in the ever developing local industry of cloth finishing. He became a bleacher to trade in one of the local mills, most possibly Netherplace. Very likely through the effects of his working with chemicals and ingestion of their fumes Andrew was to suffer from congestion of the lungs and liver and was to die of this condition aged sixty-three years.

Families carrying this surname occupied farms at Netherhouse and Burnstone during the middle of the 19th century.