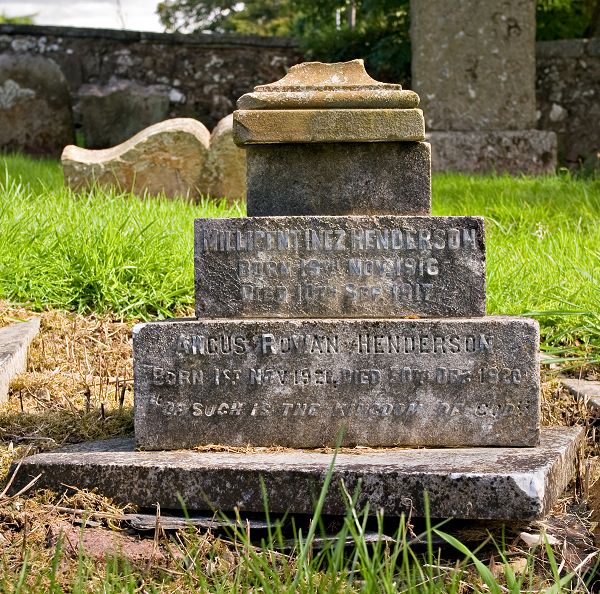 Millicent Inez and Angus Rowan Henderson were the infant children of ship builder Wilfred Henderson who married Mary Gardner Rowan, the daughter of marine engine builder David Rowan, on 25th June 1913 in Holy Trinity Church, Ayr. The wedding was conducted by the Bishop of Glasgow and Galloway.

Their daughter Millicent survived for only ten months, dying of tubercular meningitis on 10th September 1917. Their son Angus who was born on 1st November 1920 survived for only two months, dying on 30th December 1920 following the onset of ‘sudden convulsions’ in his grandparents’ home, Dunskaig, in Racecourse Road, Ayr.
The Henderson family’s usual residence was listed on Angus’s death certificate as Hazelden House, Newton Mearns. Why was Mrs Henderson in Ayr when Angus died? The reason is not known, but perhaps she had travelled to her parents’ home in anticipation of Angus’s birth in November and had remained there over the Christmas season.

The children’s father, Wilfred Henderson, the son of Sir Frederick Ness Henderson, was a grandson of William Henderson who along with his brother David founded the shipbuilding firm of D. & W. Henderson & Co. of Finnieston. Wilfred was a second cousin of Arnold James Henderson who died at Southfield House on 6th March 1913 (cf.monument Z14).

Sadly the upright portion of this monument has broken off, or possibly has been broken off by the vandals who have removed some of the lead lettering. The recorders at first thought that the date of Angus’s death was 1928 but on closer inspection it was realized that the zero in 1920 had been damaged by the use of an instrument in an unsuccessful attempt to remove it, giving it the appearance of an eight. The date of Angus’s death as recorded on his death certificate is 30th December 1920.