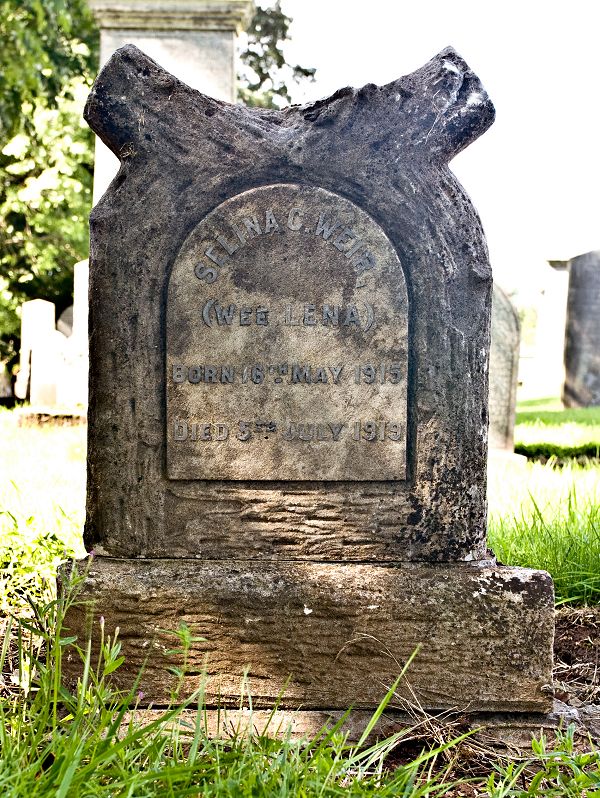 Selina Cottle Weir survived for only four short years of her life before being laid to rest in Mearns Kirkyard. Born to James Weir and his wife Agnes Borthwick within a year of the start of the First World War, Lena, as she appears to have been known, would have enjoyed an untroubled childhood playing amongst the animals of Burnhouse Farm.

Burnhouse Farm was where her father plied his occupation as a farmer. James Weir and his brother were originally coal miners, but had decided to leave that dangerous and unhealthy occupation for the fresh air of Mearns. They did not follow the traditional farming practices of the area but concentrated on growing strawberries which they allegedly did very successfully. Their enterprise greatly helped the finances of local children who gained seasonal employment picking the strawberry crop in the summer and weeding the fields in autumn. So successful was this business that they were able to take on the land of nearby Crofthead Farm, working it in conjunction with Burnhouse. Crofthead Farm, since demolished, was situated where the Mearnscroft housing development is to be found.

Three-storeys high, Burnhouse Farmhouse was of Georgian design and construction. Much better quality than the more common style of steading, associated barns and outhouses, it would originally have been built for a wealthy farmer. The farm, which still operates as such, covered fifty-two acres of good arable land capable of supplying a good living to its occupants. It is situated on Waterfoot Road near to Mearns Castle.

The effect such a loss had on this family can be seen in the memorial set up to mark her grave. Cast in the style of a natural grown tree cut off as its branches start to develop it gives a clue to the fact that this was a life cut short. Funeral symbolism in gravestone design was very strong during the period when this one was erected.